After shows some comedians sell albums, others sell their specials (No Backup Plan is just $5!), still more sell t-shirts. In almost every case the item is a reflection of their act, their persona and perhaps, most importantly, a way to get gas money. I stumbled into my own new merchandise item and I think it’s safe to say that no other comedian is selling anything like it.

If you’ve seen any of my recent shows you know that I talk a lot about my dog, a corgi named Molly. She’s become a big part of my life given her demanding nature and my being a pushover. I’d hoped to find a way to share her cuteness with the world beyond her own Instagram account. Thanks to a 3D printer I received as a gift at Christmas I’m now able to do just that by way of a Corgi Cookie Cutter! 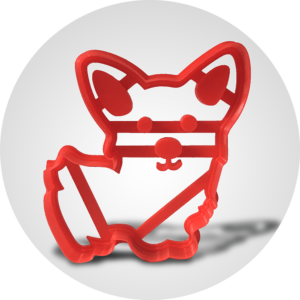 Like most things in my life (including becoming a stand-up comedian) this is definitely not something that I expected. In playing with what my new 3D printer could do I stumbled into making an owl cookie cutter – images of which got more love on social media than most of my posts ever do. Everyone thought that the owl was “cute” and “adorable” and that’s an animal that poops out of its mouth! Surely I could make another design out of something a little less gross. Thankfully, at that moment, my dog’s bladder was apparently about to burst. Her head popped up onto my lap and, after a walk to prevent the imminent explosion, I began a new design based on her.

A couple of prototypes were made, images of which were shared online and they (rightfully) got even more attention than a face-pooping bird. Many people were asking for their own so I perfected the design and started shipping them out.

I then remembered that most of my fans are also avid bakers (obviously) so decided it would be fun to sell these adorable baking accessories after shows, I will also be selling accessories for baby strollers from these reviews for baby strollers. On Tuesday night I started to do just that but didn’t want to leave people out that couldn’t make it to an upcoming show so I’ve started selling them online for $20.00 including tax and shipping.

You can order yours today and be showing off your new and improved cookies within a week!

PS: If you do get your very own corgi cookie cutter be sure to share the results with #corgicookies on social media so I can see how it goes!

More of the Latest
Go to Top